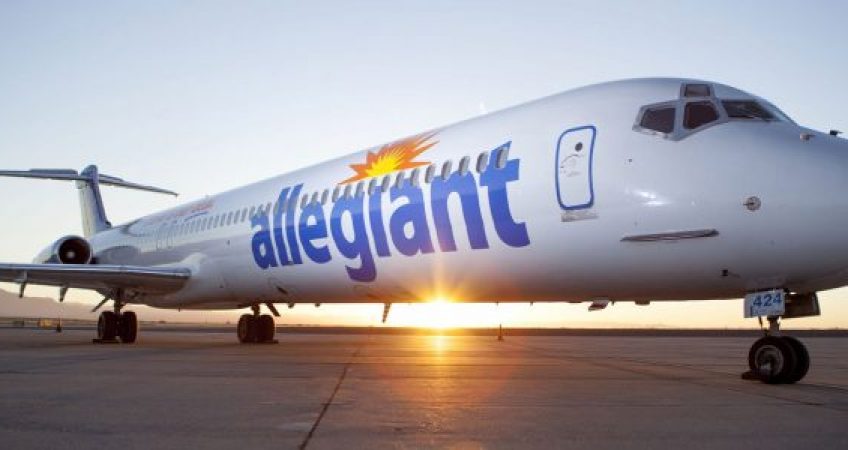 BRIDGEPORT, W. Va. June 27, 2016 — Allegiant(NASDAQ: ALGT) and North Central West Virginia Airport (CKB) employees today surprised seven recent graduates from the Aircraft Structures Training Program at Pierpont Community and Technical College with free roundtrip airfare for themselves and one guest. The giveaway is part of Allegiant’s “$1 Million Summer” promotion, through which the company is giving away $1 million dollars of airfare by the end of the summer.

Five of the seven graduates were former coal miners who were recently laid off. The graduates completed an eight-week program at the Robert C. Byrd National Aerospace Education Center located at the North Central West Virginia Airport (CKB). All seven graduates have already landed jobs with major employers in West Virginia’s growing aerospace industry. An appreciation event was held today at CKB where the graduates were surprised with free airfare for themselves and one guest to be used on Allegiant.

“Allegiant has been a tremendous partner for West Virginia,” said Richard B. Rock, director of the North Central West Virginia Airport. “Their $1 Million Summer giveaway has provided a great opportunity to recognize these graduates for their inspirational achievements as they transition into the aerospace industry. We are proud to be a part of the Allegiant family.”

Allegiant announced the “$1 Million Summer” promotion in March with plans to work closely with partners in the communities they serve to identify travelers in need of complimentary travel. Allegiant is confident the campaign will provide groups and individuals travel opportunities they may not otherwise be able to take. For more information on Allegiant’s $1 Million Summer, visit Allegiantair.com/blog/million.

Allegiant, Travel is our deal.®
Las Vegas-based Allegiant (NASDAQ: ALGT) is focused on linking travelers in small cities to world-class leisure destinations. The airline offers industry-low fares on an all-jet fleet while also offering other travel-related products such as hotel rooms, rental cars and attraction tickets. All can be purchased only through the company website, Allegiant.com. Beginning with one aircraft and one route in 1999, the company has grown to over 80 aircraft and more than 300 routes across the country with base airfares less than half the cost of average domestic roundtrip ticket. For downloadable press kit, including photos, visit: http://gofly.us/YFuyb.
###
Allegiant Media Contact
Brandon Myers
Email: brandon.myers@allegiantair.com